The seasonal cold finally arrived with the east wind, but once again we were safe from rain. Wrapped up toddlers (no Ivy or Holly to light the fire) arrived, gloves essential. Only the Twilight kids needed the fire.

The great news was Mell was one tooth less. With great courage and far too long in pain and on those dreadful antibiotics, Mell faced the dreaded dentist and had it extracted. Naturally she bought it with her. Mell introduced the toddler mums and dads to the oak boards – more of that later.

After a few games of our favourite Murder Wink,  the home Ed children played ‘guess which tooth is Mells’ with a jar full off deer, cows, otters, rabbit, fox and badger teeth. It is a great way to start the omnivore, carnivore discussions! 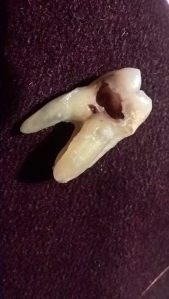 The worms have nearly eaten all the veg scraps…we need more!

The tribe  settled into one of these groups:
Mell crafting on the table, where the scrap book of trees was begun telling the stories of folklore and science. 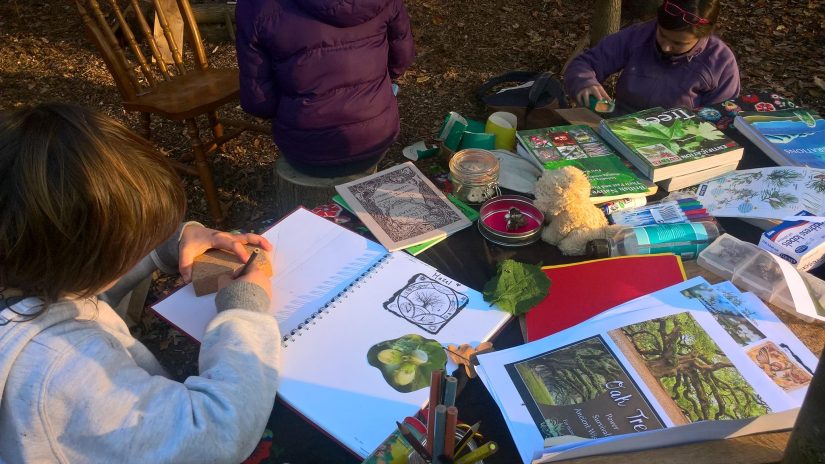 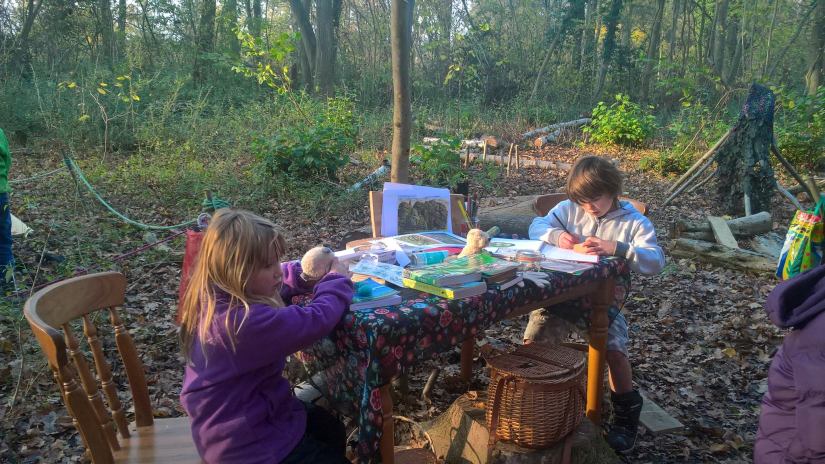 Rachel with the oak boards. Here’s the story of the Oak Boards

Four years ago, we had 10 dead oaks cut down in Kaliwood – yes, even great oaks die. Each one had a name, like the Awkward, the Handsome, the Unfortunate. After these were felled, planked and cut to a cutting list and rested for a year, they were made into the oak wood cabin by the ponds. All of the off cuts were kept, and it is these these well seasoned off cut pieces of Kaliwood oak we are gifting to all the Kinda Forest School children. The first thing we are doing with them is making them into cheese or bread or whatever boards, to gift to our families this Winter Solstice.
The first stage is to choose a board from the mixed shapes and forms. Some are even some are odd shaped.
The next stage is to sand down the surface front and back and the edges. This is what we started to do this week.
The next stage will be to oil our boards.
And that’s it

‘I cannot belief this comes from that’, said one pointing to the oak near by.

Before and after – one done side and one still to do. Mia chose an irregular shaped board, with a side beautifully sported (lined with fungi)  which you can see below. 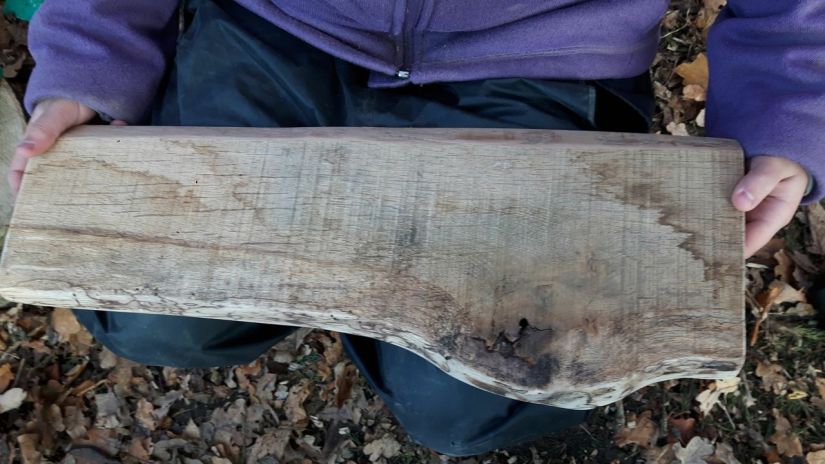 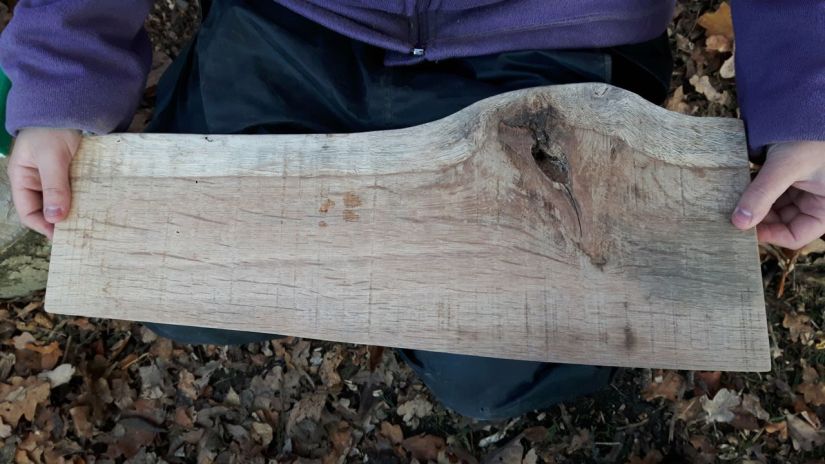 Eloise with the tools sawing and hole making. Here working with Tristrum to make a hole in a silver birch. Behind Bo cutting a spear, after which we searched unsuccessfully for some flint 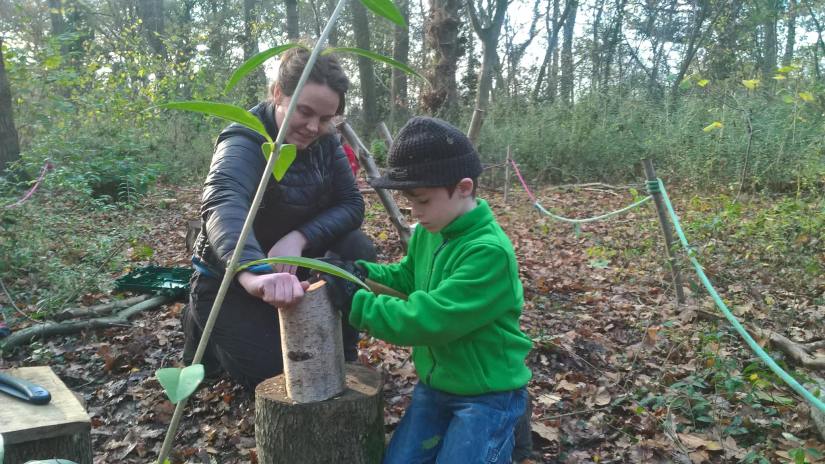 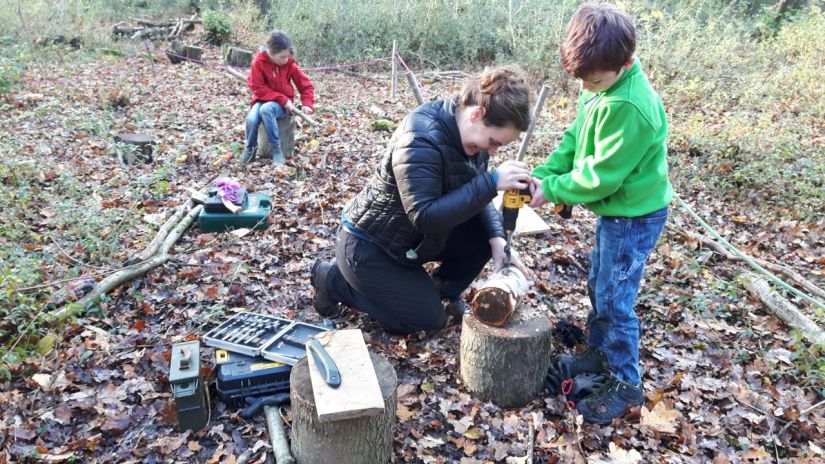 And Kym was on chippings – KYM – got a photo for me? 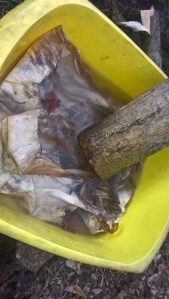 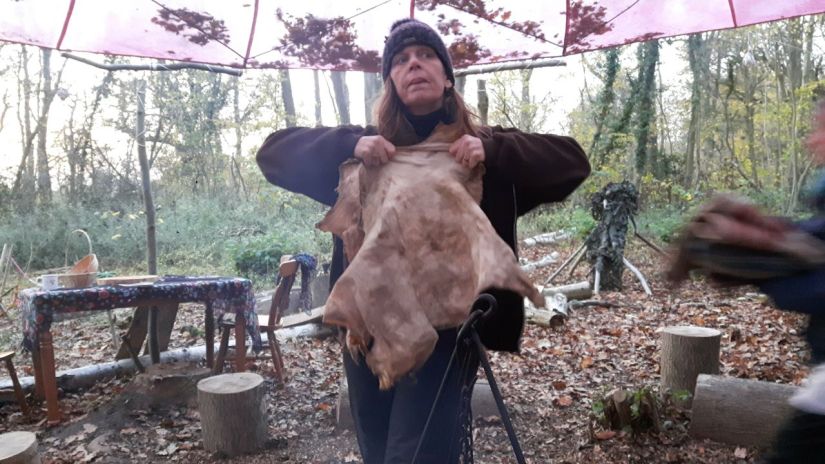 Come the evening with the Twilight session Eloise introduced us to Shadow puppets. We put up a sheet with lights behind it. Rachel did shadow yoga which made us all whoop in surprise! Eloise and X made a story of the man who cut down trees. But later, the tribe made a story themselves, a story from the first world war:
“I want your land” said one.
“I’m not giving it” said the other
Bombs – in the imaginative form of grapes we heard later –  were thrown.
Eventually peace was formed, and we all ate fire baked pizza, (bread sandwich with cheese and tomato), Ryan, the great food experimenter tried to make caramel (how is cleaning the pan Mell?)  and then cooked satsumas. Nothing daunts his imagination. His apples were very successful. Next week baked potatoes. 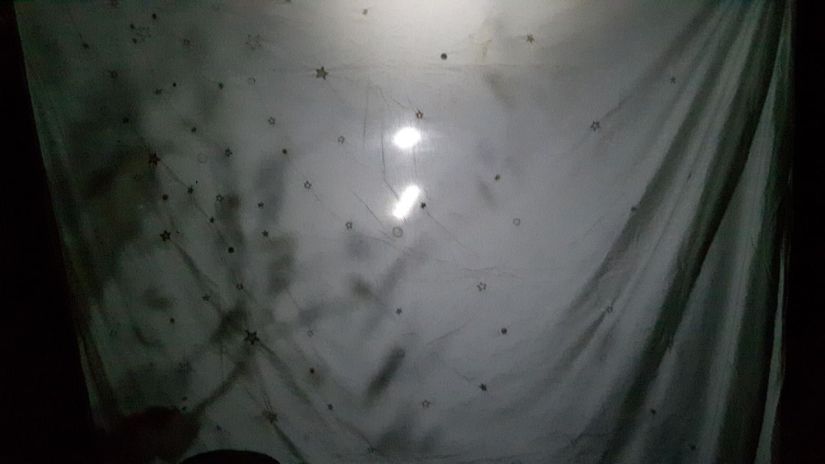