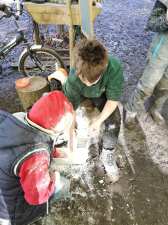 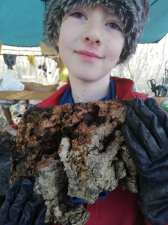 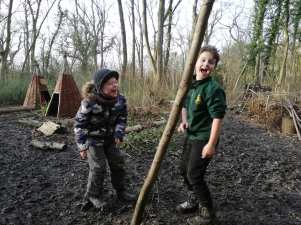 Still more mud, glorious mud. The mud kitchen is the least muddy area of forest school, and our kitchen is a symphony to mud (I did over hear Kym say, she’d just swept the floor, when someone commented on the mud quality).

The tribe love it of course.

At one moment Tris said, I’ve just remembered Eloise isn’t here. Of course we missed her, but in her spirit, Sue and Rachel organised a great warm up game of 1-2-3 x. Luis won both times, (until we found the girls hiding in the ISW bender)

Mell told us about a collabourative art project which we could contribute towards, perhaps using planet Earth, and with little people, and indeed, she and the young tribe made some little people out of branches of abandoned Christmas trees.

Leon was with us, and from him i learned the word theogony noun: theogony; plural noun: theogonies meaning the genealogy of a group or system of gods. Because of course, we were talking planets and in particular JUPITER. With some jiggery pokery helped by Leon and Bo, we managed to get the outline of Jupiter up, but it did look a bit too elliptical. Definitely needs to be measured and work on this.

Talking of planets, the call for bicycles had been so successful, people had emptied out their sheds barns, and even a hedge. The quality of most was far too good to use for parts so we’ve worked up a collabourative agreement with Lewin, the master bike mender. He will repair our good bikes, sell them and the money will be used to set Lewin’s bike workshop up in the woods. Lewin photographed most of the bikes and we put WD40 on the joints of those to be dismantled.

Some strange concoction with cornflower was made, with some amazing physics involved.

Bo gave us his complete forests school name with full actions, which could be shortened to Valpes Valpes Vulpes (latin for fox).

Luis found a make shift cart and dragged the 2 girls around, ingenious entertainment.

Bo got inspired with the idea of a clock of feathers, and Gina continued making Bo his blue tunic.

Mel made the most delicious sausage rolls in the dutch oven.

A remarkable Scottish accent arrived at the closing circle, and even some French.