It’s the biggest of planets. A huge gas planet. Very early on it’s material was found – literally. Of all the debris left behind in the wood, a long piece of black pipping left by previous owners, fitted the possibility. Working with the Swedish model the diameter of Jupiter is 3.5 meters, (compared to Earths 32 cm) With Eloise’s mother we worked out the circumference from the diameter –  circumference = π x the diameter of the circle. Pie being 3.14 = 10.99. The pipe was cut, giving us 3 reasonable lengths.

The place chosen by Bo and Rachel for Jupiter was between two straight oaks, roughly 4 meters apart.

Sam arrived to learn coppice work in the woods, but also turned out to be a keen astronomer. He helped to get the first stages of Jupiters construction sorted. Piping was not sufficient in and of itself, we needed to strengthen it with wood. Perfect timing as we’d just coppiced an acre of hazel. Sam made the first cross, and climbed the oak to raise the first flat dimension of Jupiter.

Two very tall and efficient Dutch people arrived, Rudie van den Berg and Wim (whose work is called Rope Work, and involves balancing off offshore rigs to check structure, or high above the ground maintenance, absailing down – perfect for planet construction). Rudie – equally tall – is a designer. What with Sam the astronomer, we had a perfect team to create  Jupiter. They began by firming up structure with multiple 3.5 meter hazel lengths cros-crossing the orb.
“It’s too much like an Egg” they said, and put in even more struts. 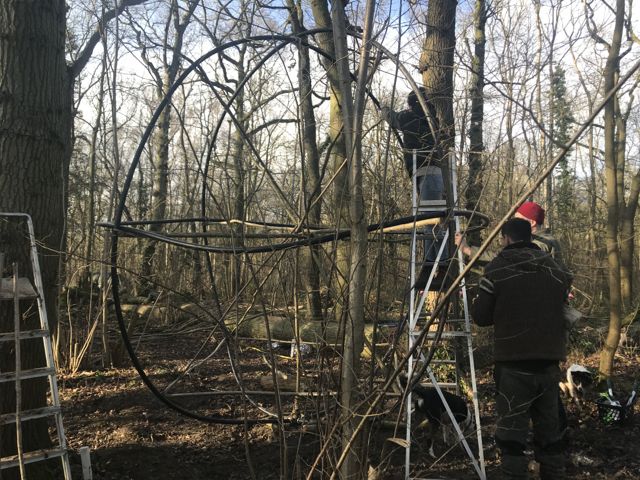 Finally Jupiter, was raised, with Rudie holding up the earth for the scale comparison.

At Forest School the next day, a new person, Toby, came to visit, and it turns out he’s mad about the solar system and nature. On seeing Saturn and knowing we’d have to take it apart, he suggested we used one of the red rims as the great red eye of Jupiter. Wow.

Bo and Billy holding up earth in front of Jupiter.

The largest planet in the solar system – more than twice as massive as all the other planets combined. Jupiter’s stripes and swirls are actually cold, windy clouds of ammonia and water, floating in an atmosphere of hydrogen and helium. Jupiter’s iconic Great Red Spot is a giant storm bigger than Earth that has raged for hundreds of years.

Jupiter is surrounded by dozens of moons and has several rings, but unlike the famous rings of Saturn, Jupiter’s rings are very faint and made of dust, not ice.

Jupiter has the shortest day in the solar system. One day on Jupiter takes only about 10 hours (the time it takes for Jupiter to rotate or spin around once)

Jupiter makes a complete orbit around the Sun (a year in Jovian time) in about 12 Earth years (4,333 Earth days).

Its equator is tilted with respect to its orbital path around the Sun by just 3 degrees. This means Jupiter spins nearly upright and does not have seasons as extreme as other planets do.

With four large moons and many smaller moons, Jupiter forms a kind of miniature solar system. Jupiter has 53 confirmed moons and 26 provisional moons awaiting confirmation of discovery. Moons are named after they are confirmed.

Jupiter’s four largest moons—Io, Europa, Ganymede and Callisto—were first observed by the astronomer Galileo Galilei in 1610 using an early version of the telescope. These four moons are known today as the Galilean satellites, and they’re some of the most fascinating destinations in our solar system. Io is the most volcanically active body in the solar system. Ganymede is the largest moon in the solar system (even bigger than the planet Mercury). Callisto’s very few small craters indicate a small degree of current surface activity. A liquid-water ocean with the ingredients for life may lie beneath the frozen crust of Europa, making it a tempting place to explore.